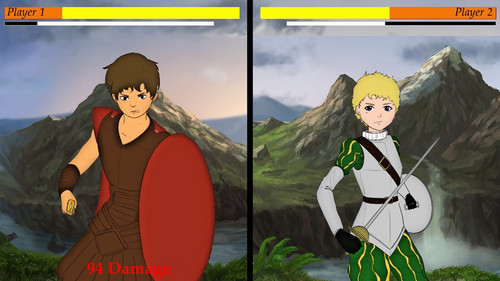 I've been thinking about this really hard since the beta has been posted. The image shown is a mock-up of a vertical oriented split screen and I am trying to decide if I should switch to this style.

Ever since the game was conceived, it always was a horizontal split-screen. However, this has become antiquated because the original idea was to have your character walk left and right. There was a problem with this in presentation as it looked awkward if the players would scoot all the way to the left and right of the screen and continued fighting there, leaving the middle empty. I switch to a side-step mechanic but in the end, you still end up fighting in the middle, thus leaving too much room on the side.

I tried to remedy this with text but realized that it wasn't enough to justify the horizontal screen anymore. Now I'm contemplating if I should switch to a vertical screen. One big advantage is that the characters will be huge on the screen and will have more detail to see. It will be a big eye-opener to spectators, especially since I'm now searching for a new artist and will have to consider this new outlook on the game. You can also still side-step, though it might look awkward as the character will be hiding parts of their body outside the boundaries of their screen, but I'm sure that's not as bad as having a great deal of empty space.

So after checking out the beta, compare the horizontal to this mock-up and tell me if you guys think it would improve the game if it was vertical.